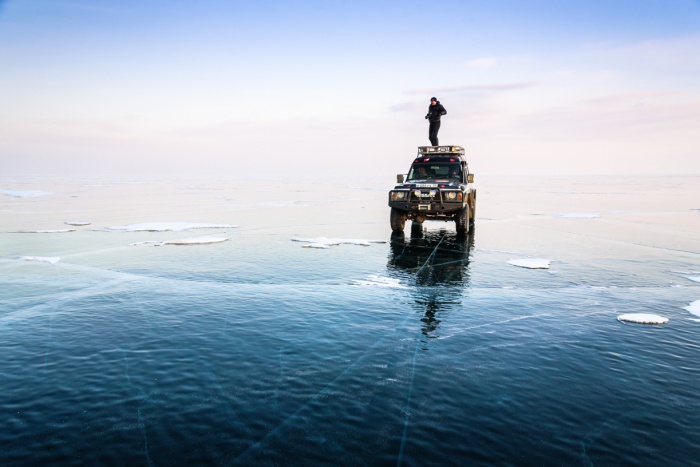 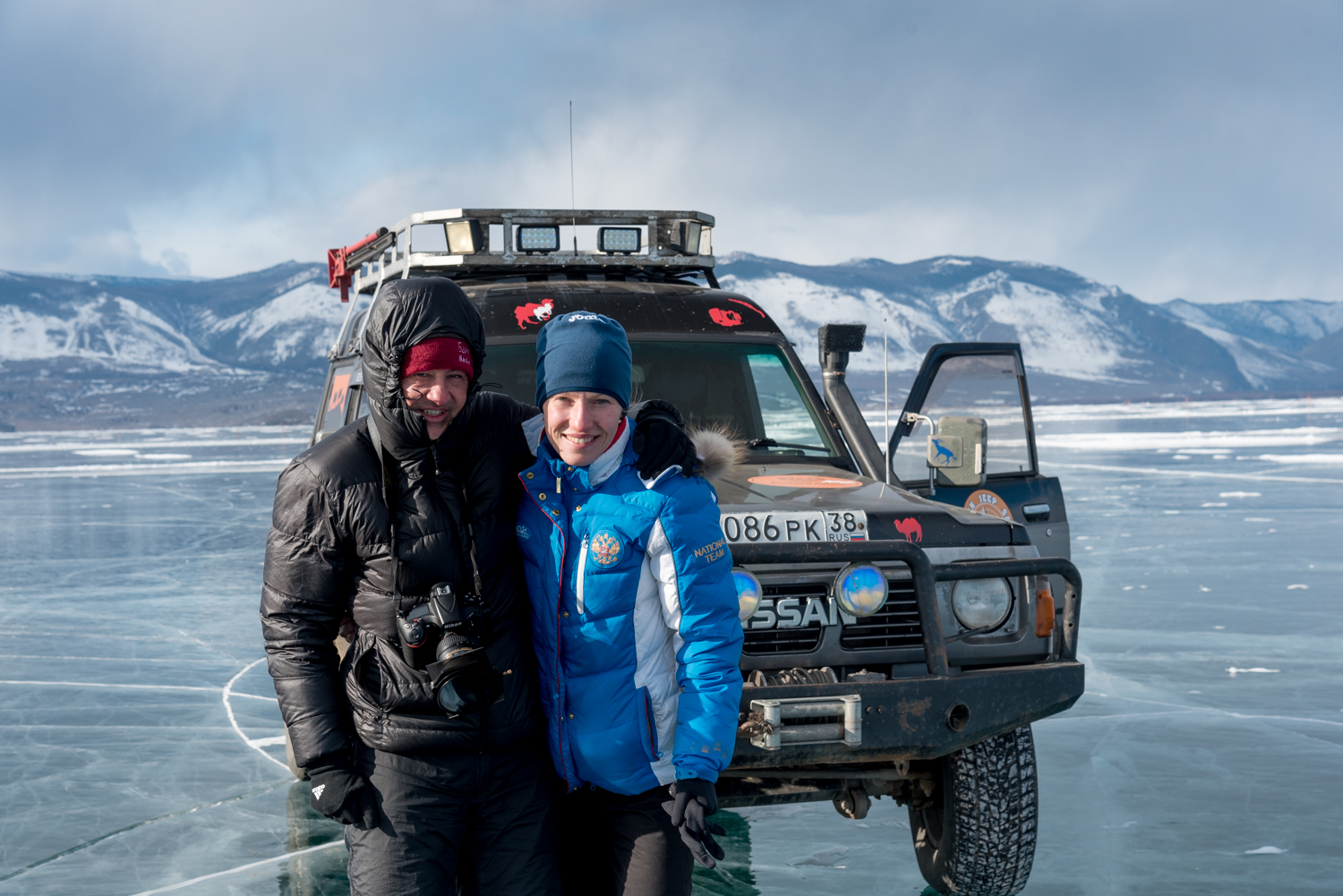 This is the Baika lakel! All about deepest lake in the world you can read in here in WIKIPEDIA

Here is a short version from me: could you imagine 1642 metters down?!? (679km long and 80 width). Here's a "Cup" of fresh pure water just in case of global warming on the planet. From more than 2 thousands of organisms wich living in it, about 1 thousand are endemic (organisms witch belong only this one areal! Baikal water has almost no salts and minerals in its composition. It is almost distilled! 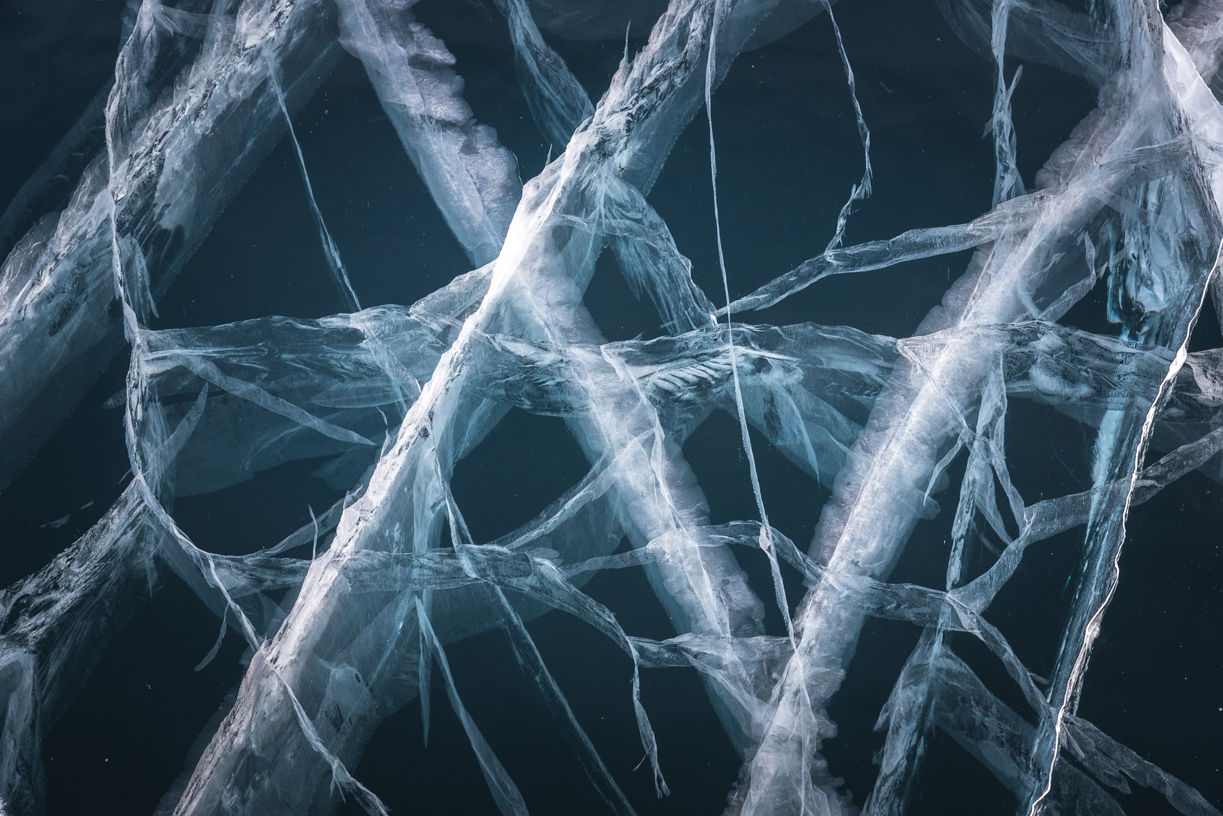 Lake Baikal is a huge organism that cleans itself in a few days from any "biological dirt"! For example, if someone drowns in Baikal "sea" after 5 days rescuers no longer find the victim, because it will be possible to find only bones and teeth and after a month - only the teeth. 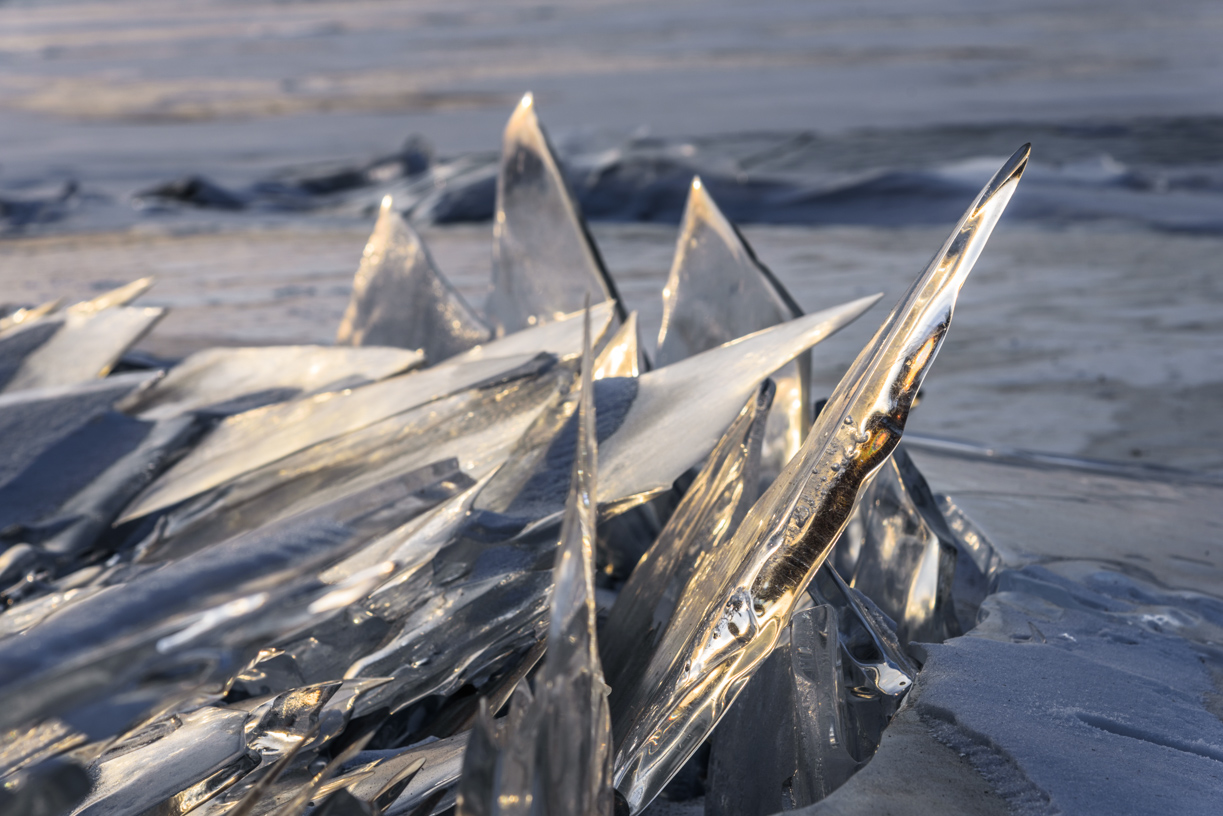 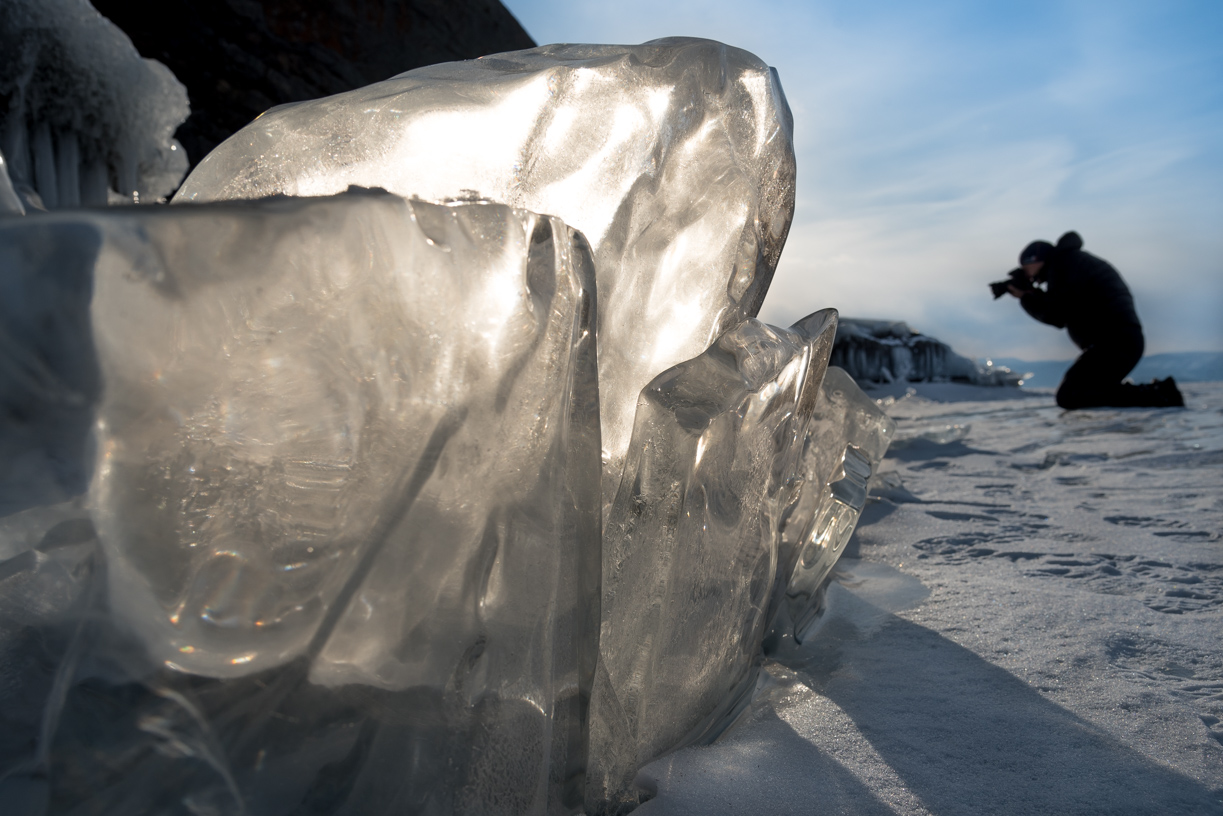 I have already talked about the purity of lake Baikal. There is still one record that is beaten down by the lake. It is his transparency! Baikal is visible to a depth of 40 meters!!! The purest water is observed during the formation of ice and immediately after thawing. And, of course, the ice itself freezes with amazing transparency!

Yet it is worth noting that the Baikal get frozen only the beginning of February. In the first half of the winter there are heavy storms in the sea, which also remains as beautiful formationson at the rocky shores. Then follows a period of 40 Celsius, at which Baikal holds down the smooth ice. And the longer the frost, the thicker and stronger ice, by which one can now travel by car. And it is so transparent that it seems that you're standing on the cracked glass.And even if snow falls, strong wind will simply blow it out from the ice surface (this snow mooving even more make the surface polished). 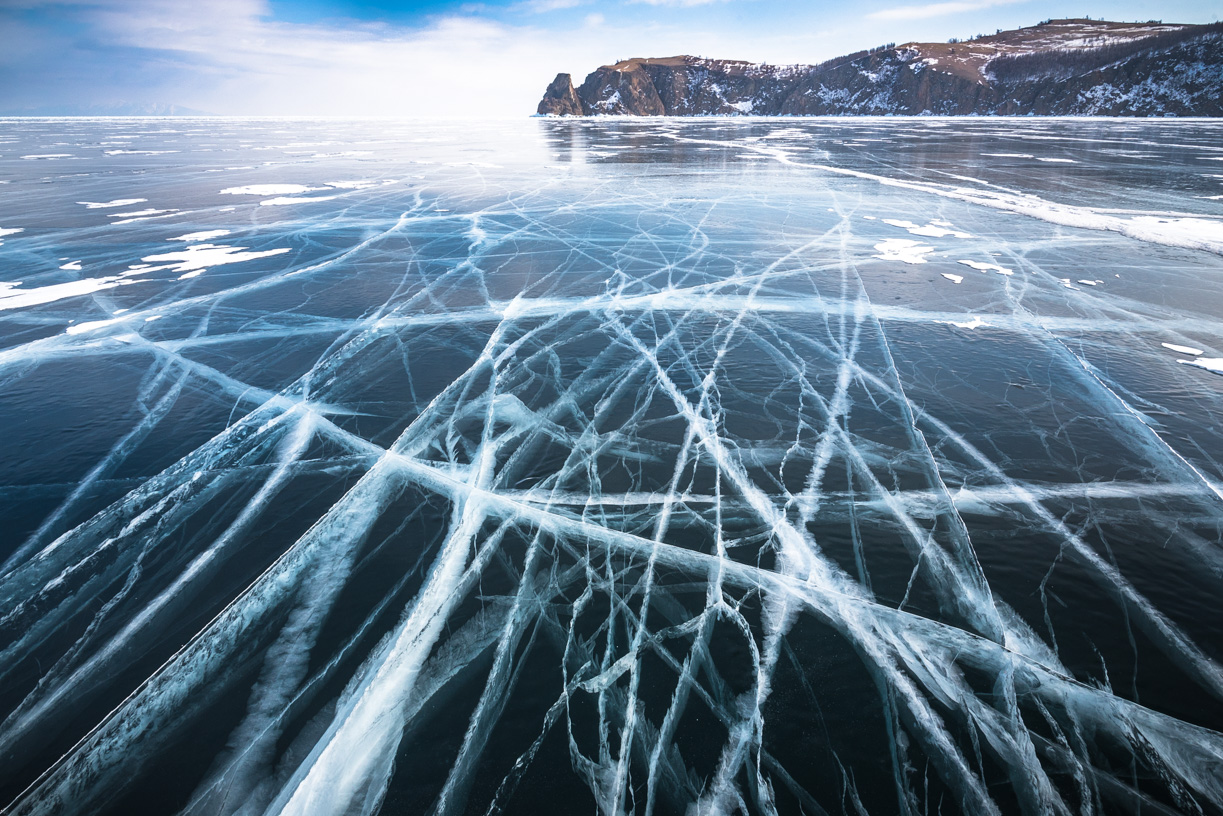 Exactly for this striking transparency of the Baikal ice professional photografer Rolf Gemperle made a tour to deep Siberia. 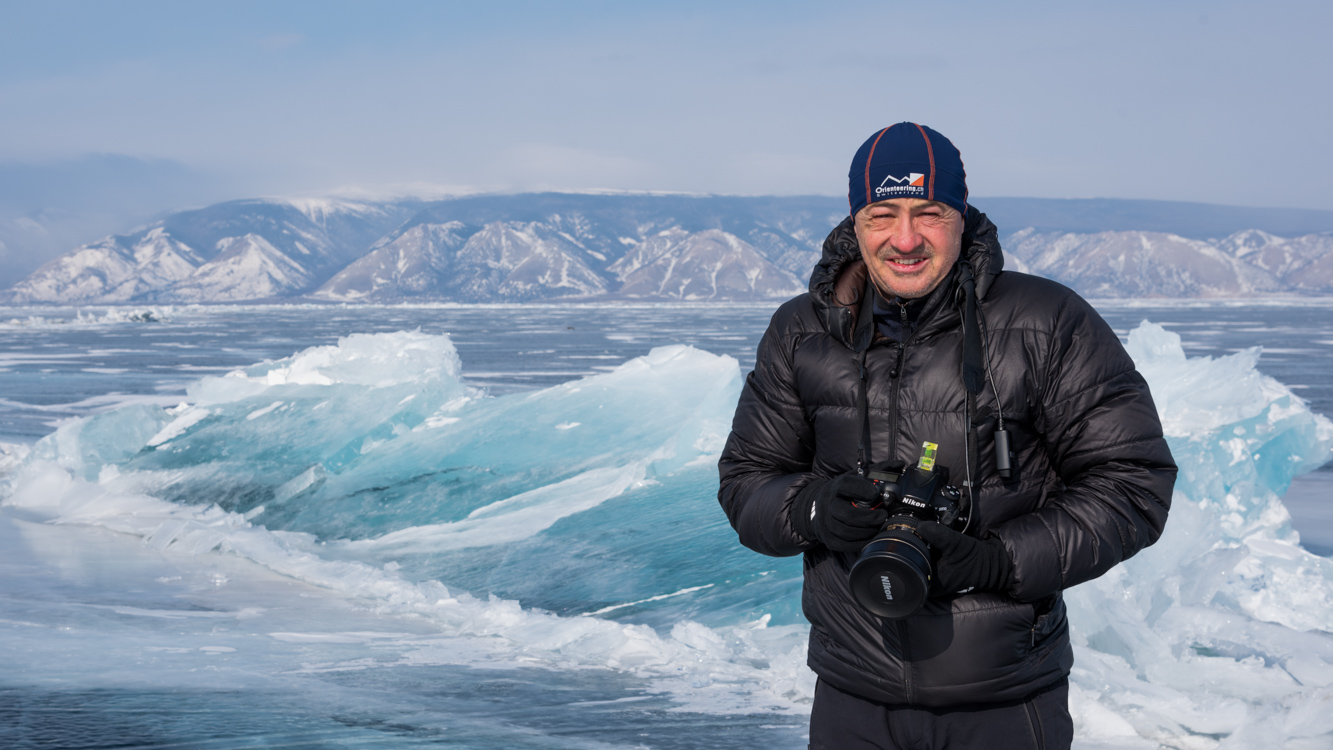 Next year at the time from end of February to beggining of March he is going to make phototour for shooting the greatest diversity of ice: smooth and transparentice, ice hummocks, ice caves with a million icicles inside, the icy stalactites and stalagmites and much more..:) 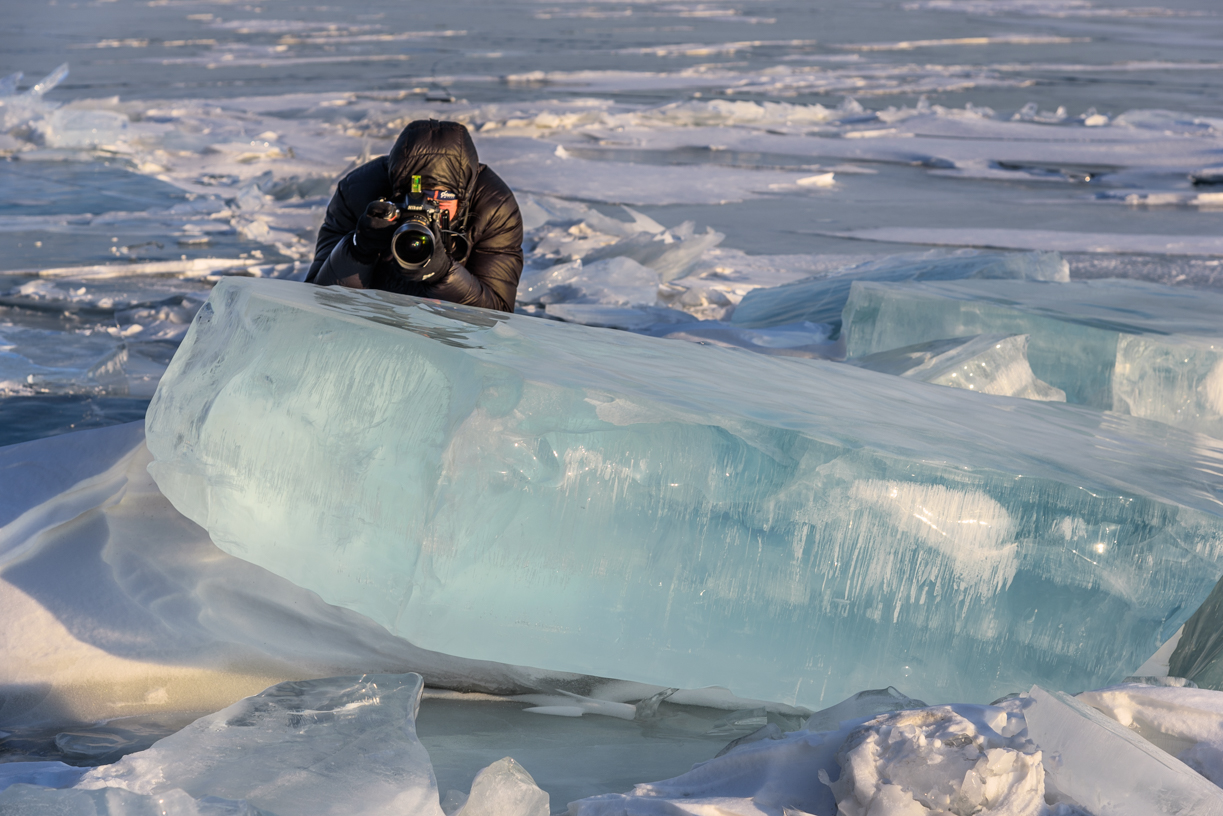 This time I don't do a big movie. Gloss, transparency and the bluecolor of the ice will try to convey the whole range of feelings on my and Rolf's pictures.

On the lake Baikal there are various kind of ice. Here are natural phenomens that attract with their niqueness: by itself it is pure, polished ice of lake, "hummocks" and the ice on the shores with many ice caves.With increasing temperature and contraction cracks the ice is squeezed to the surface and creates hummocks - heaps of rubble ice. Such hummocks - a Paradise for photography. We were always stuck with the cameras there! 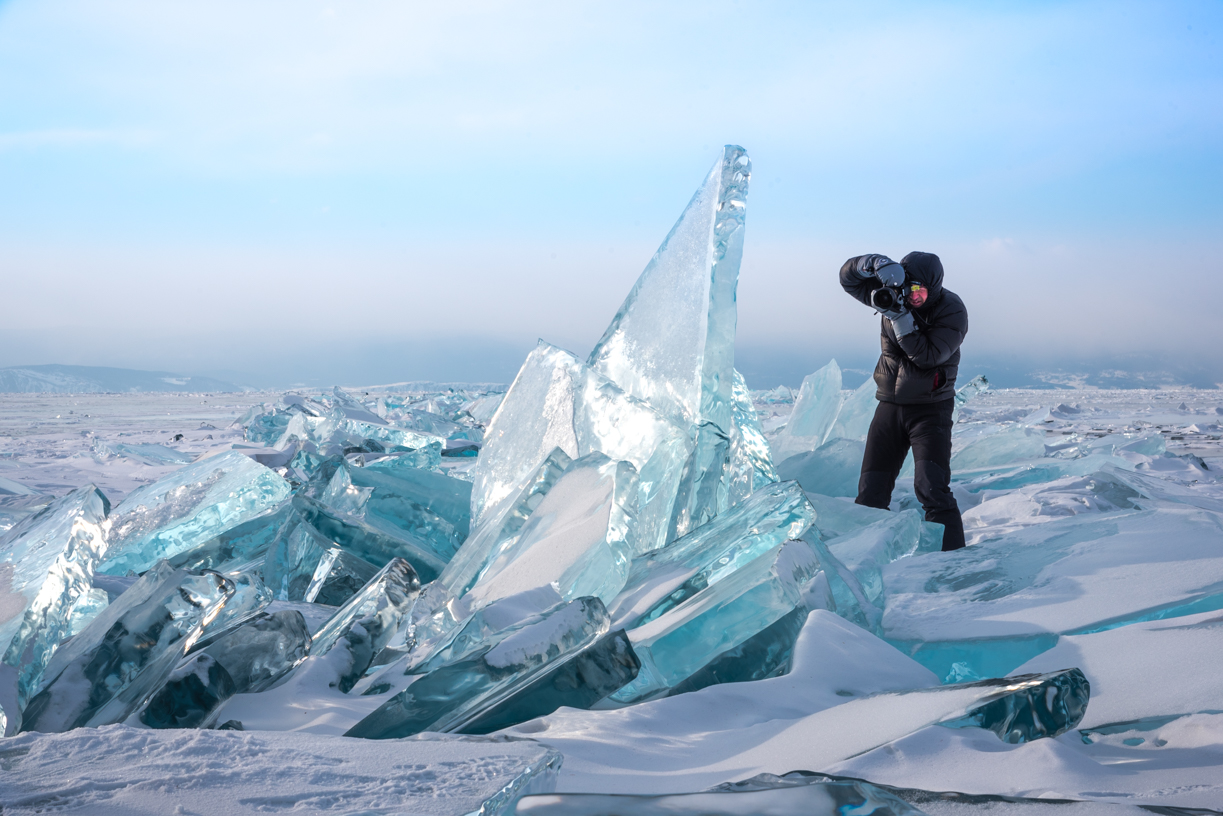 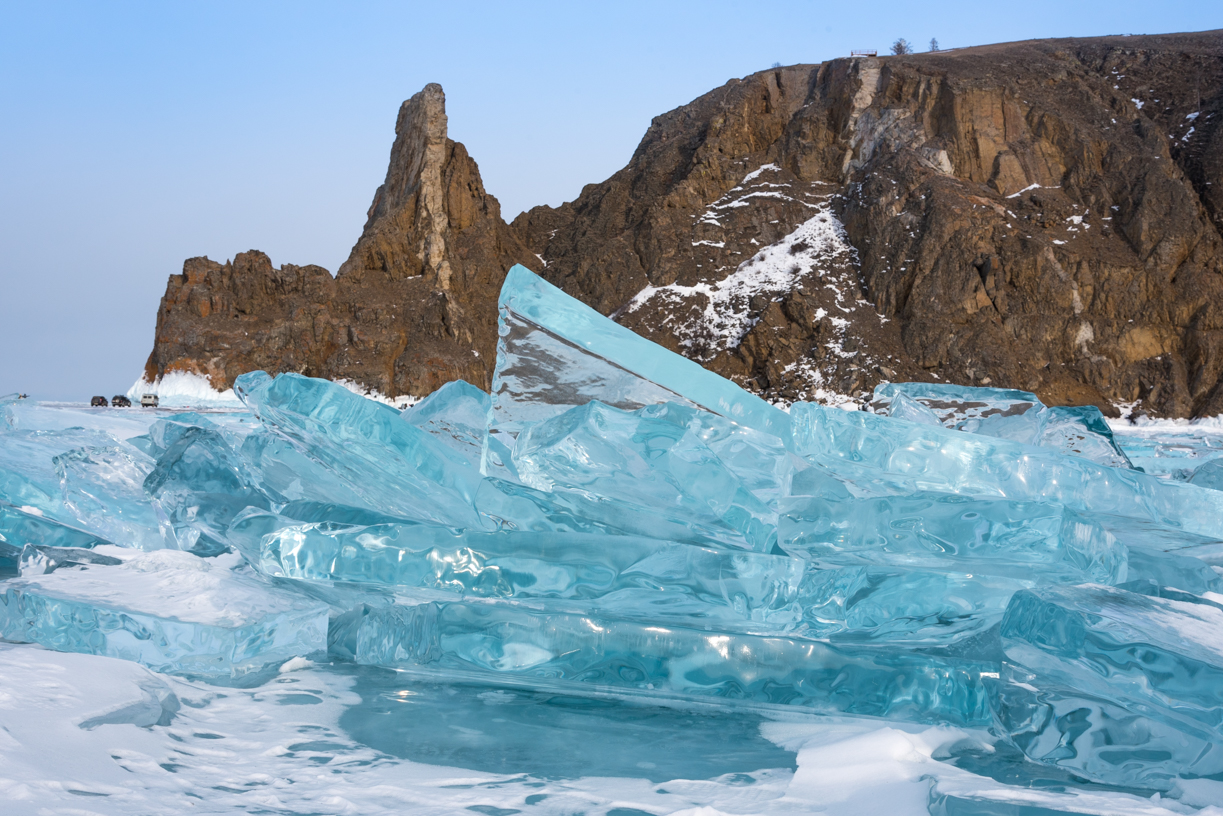 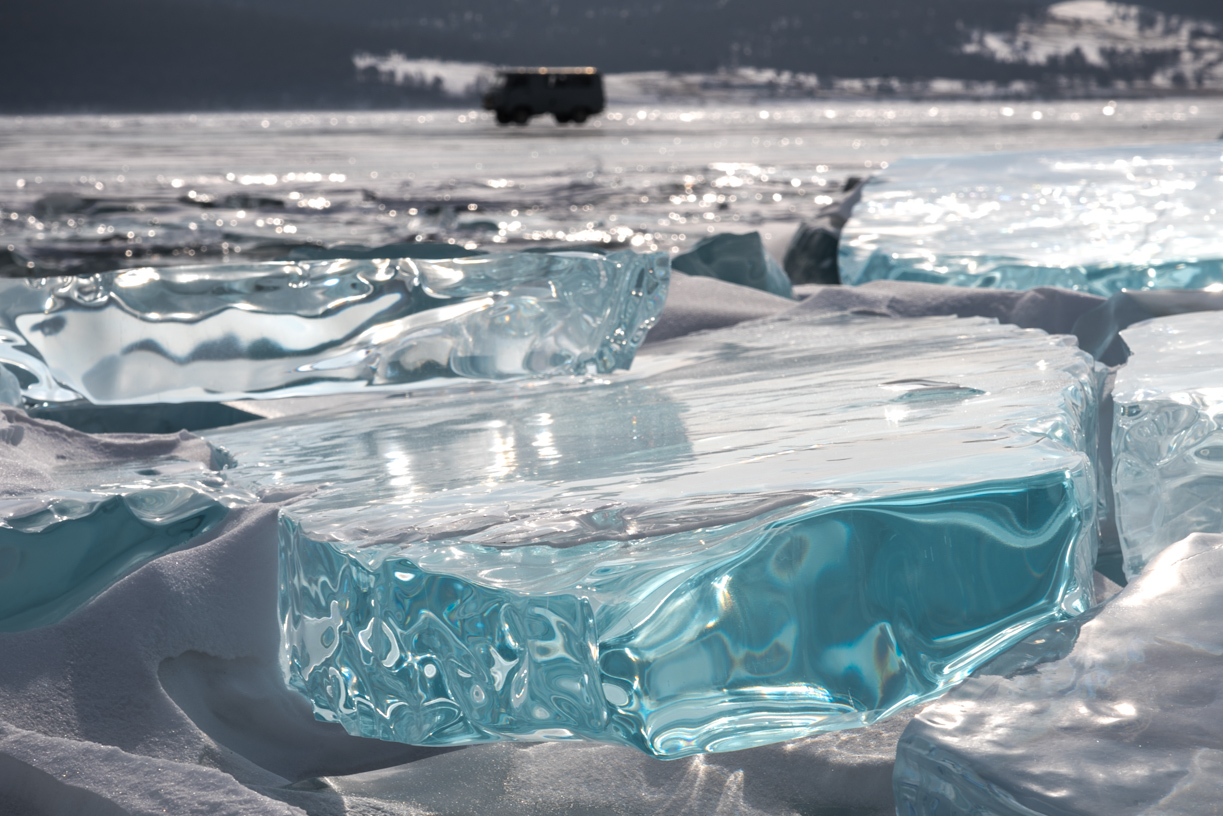 Blue as the sky, dark or transparent as a glass.. All of the hummocks we had seen were up to 2 meters height . But local found them up to 5 meters height in the past!!! Of course, this requires the right conditions... so the next year may be very different. Lake Baikal is unpredictable.

Because of this we can come back on Baikal every year - something new will be always! 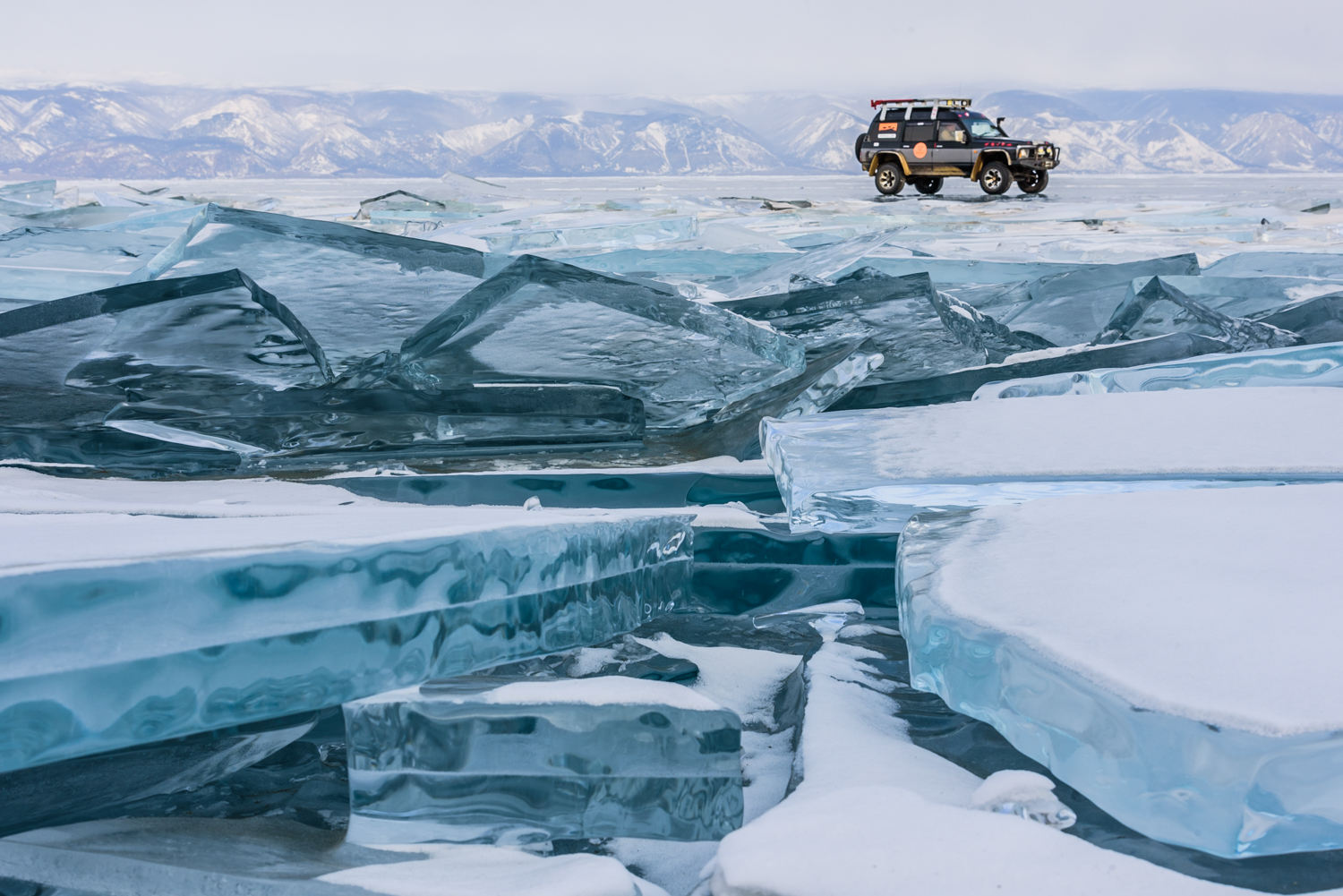 Ice caves and the shore with icicles and ice shells - is a separate issue. Here along the island of Olkhon on coastal rocks you can spend days for makro photography! All of this kind of beauty appear in December, when the Baikal raging storm and the water thrown on the rocks freezes, forming a temporary "stalactites" and "stalagmites" on all over a steep rocky shore. 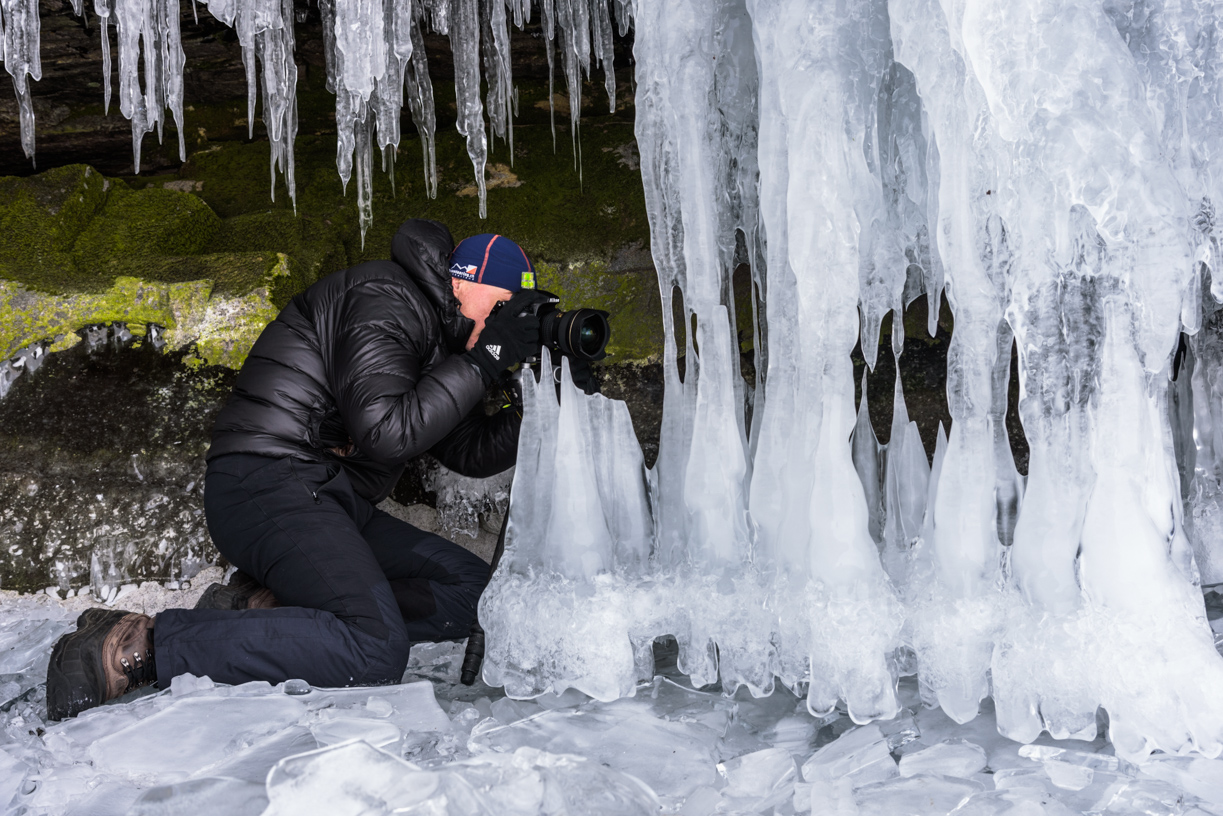 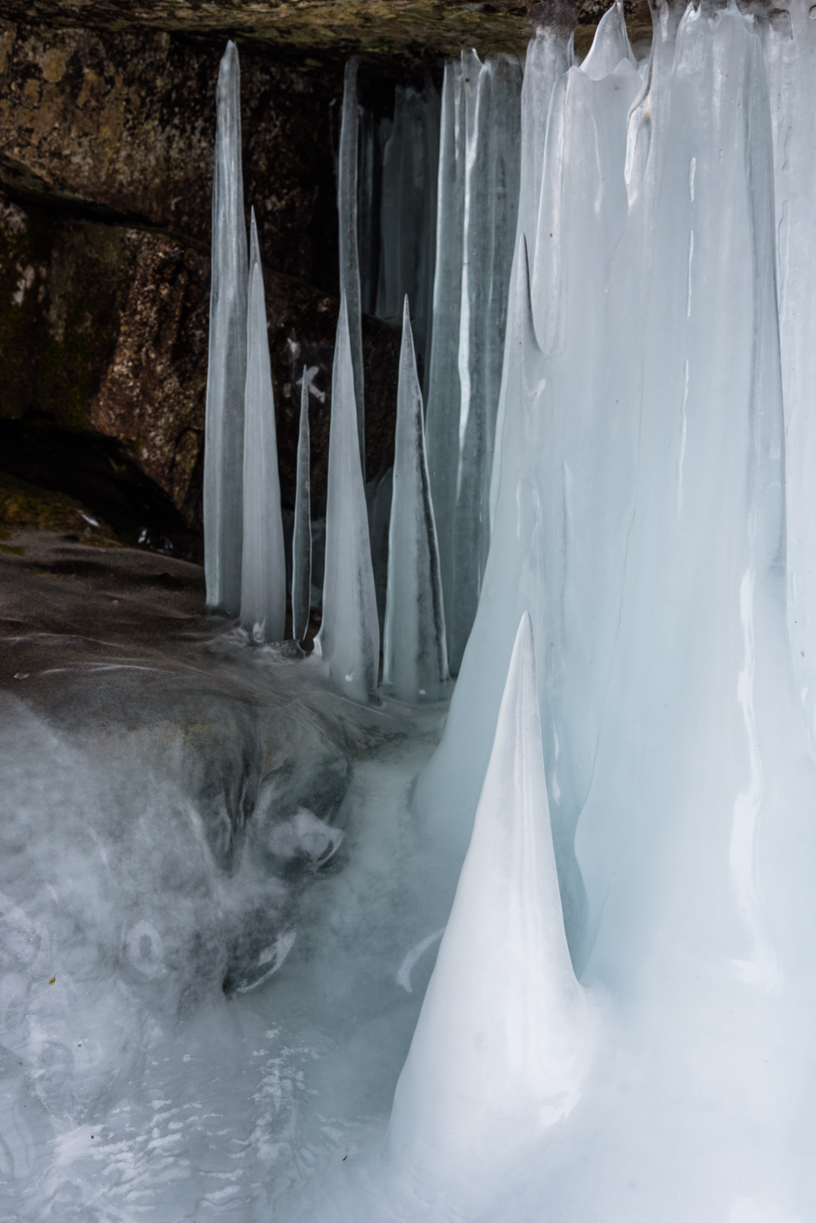 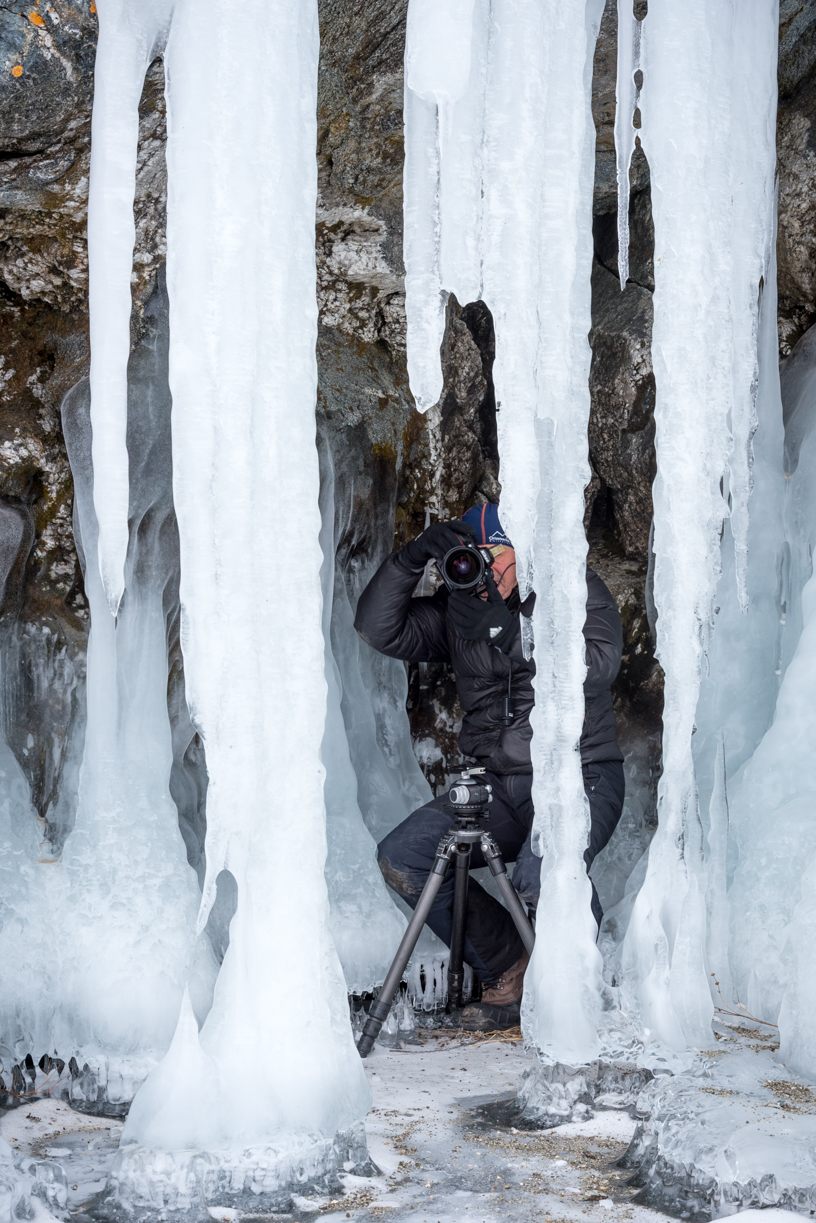 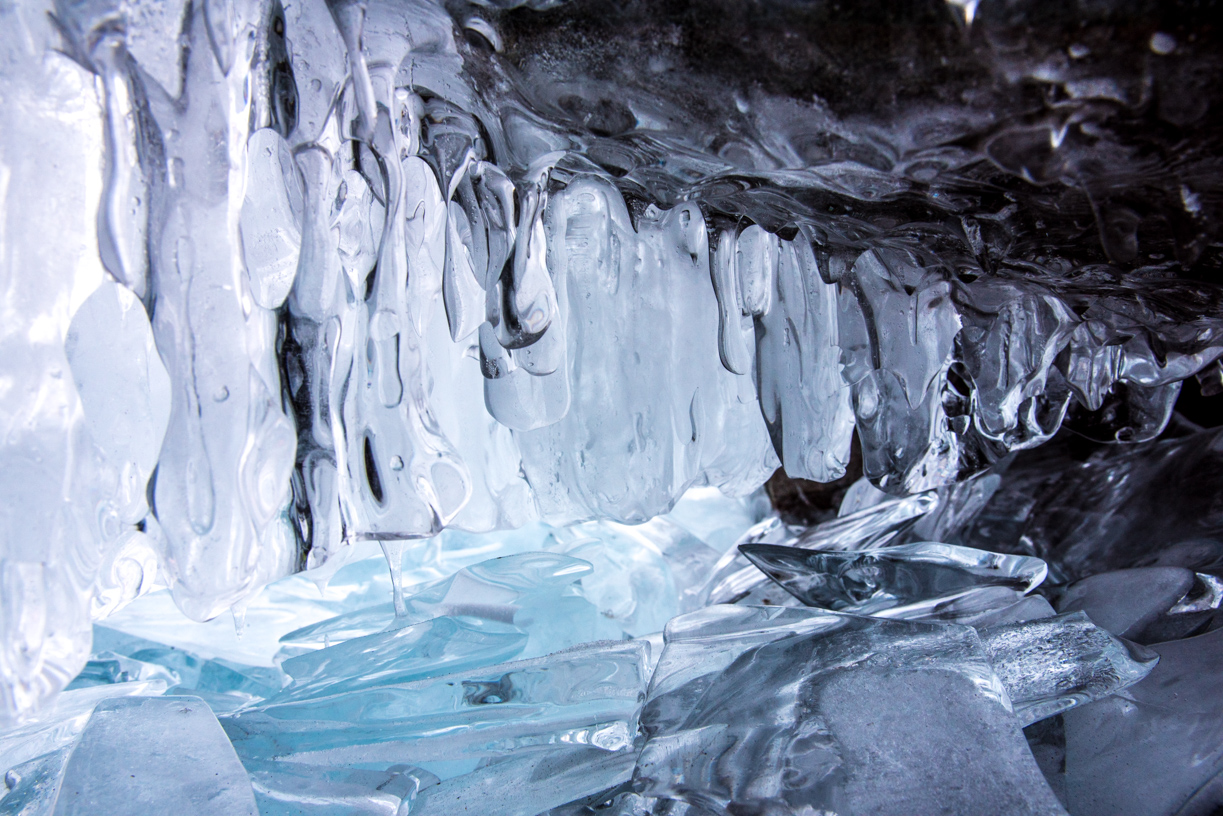 But I was most struck by the ice itself. For lovers of abstraction in the art is Paradise! Walking there and under your feet is abstract paintings! People say that frozen water has most harmonious and correct structure! It is look like truth. 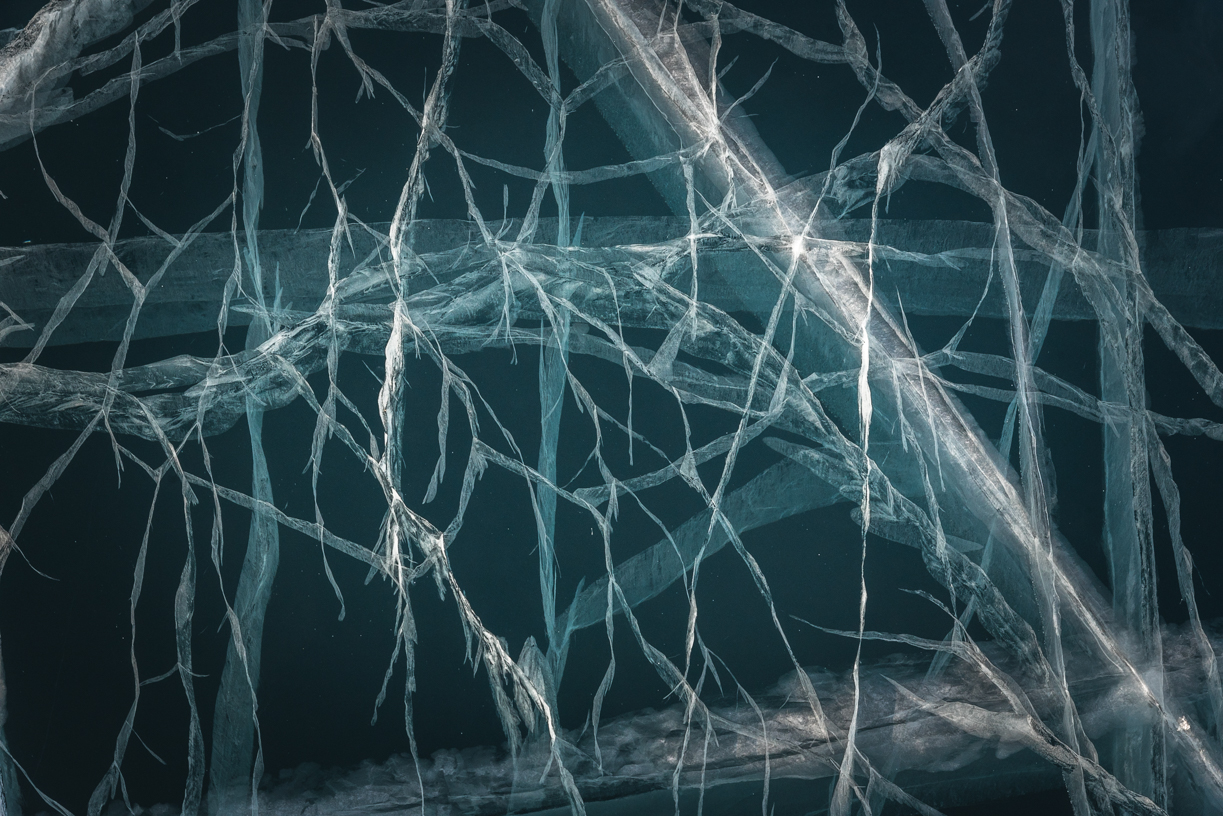 And, imagine what it's like to run on this ice!!! In spiked shoes of course;) (Spesially for this kind of ice running the "asics" has one nice model). By the way there is BAIKAL MARATHON! This year It was exactly at time when we were there! But I had to train for sprint for Russian Orienteering Cup.. so it seems that marathon will be next time..

When I did my training I run and run along this lines and patterns and it was hard to stop! It was only one problem to run long - crazy cold wind. 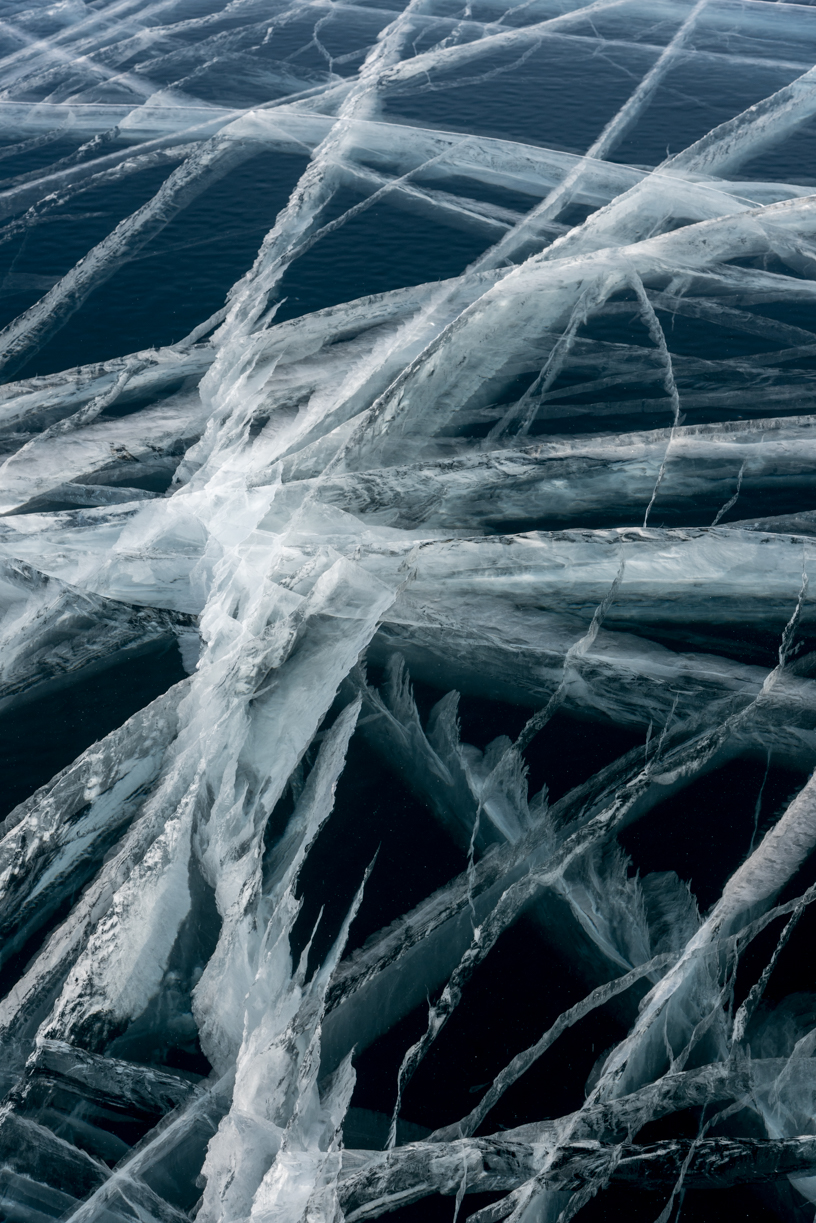 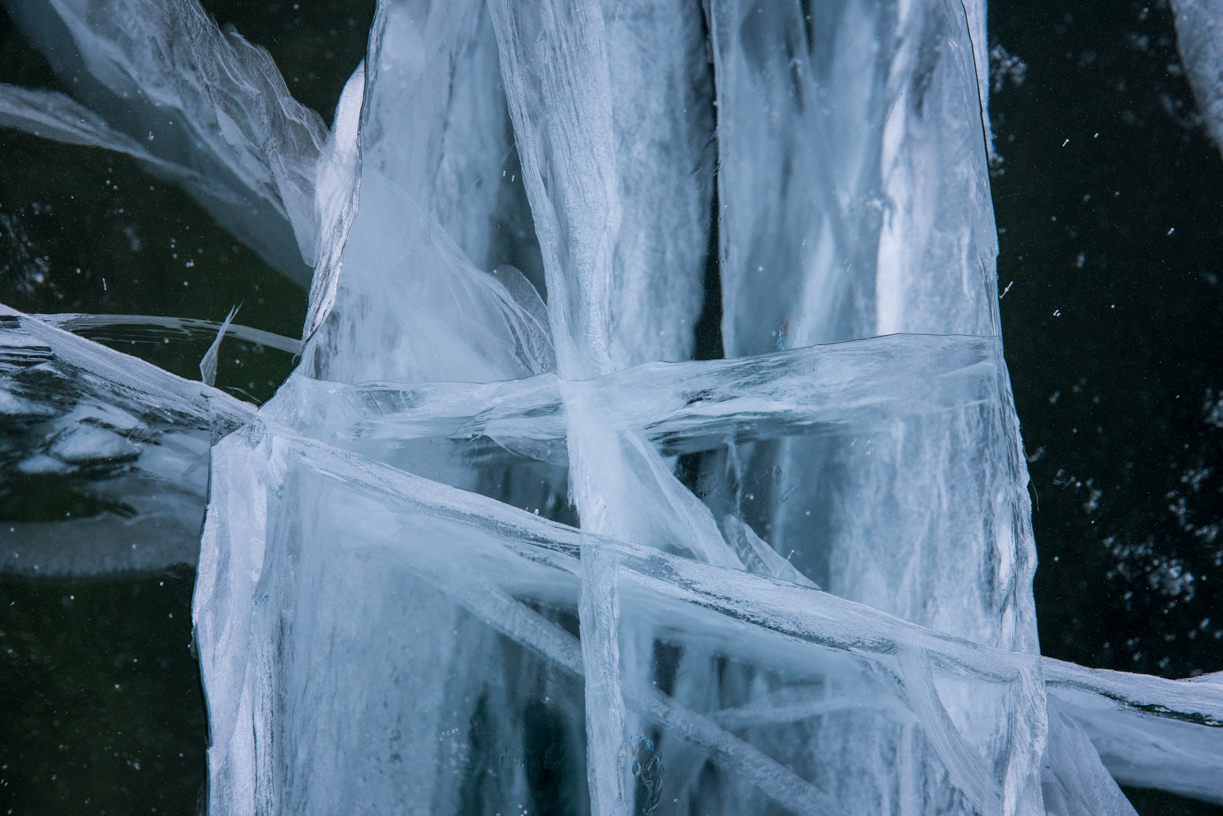 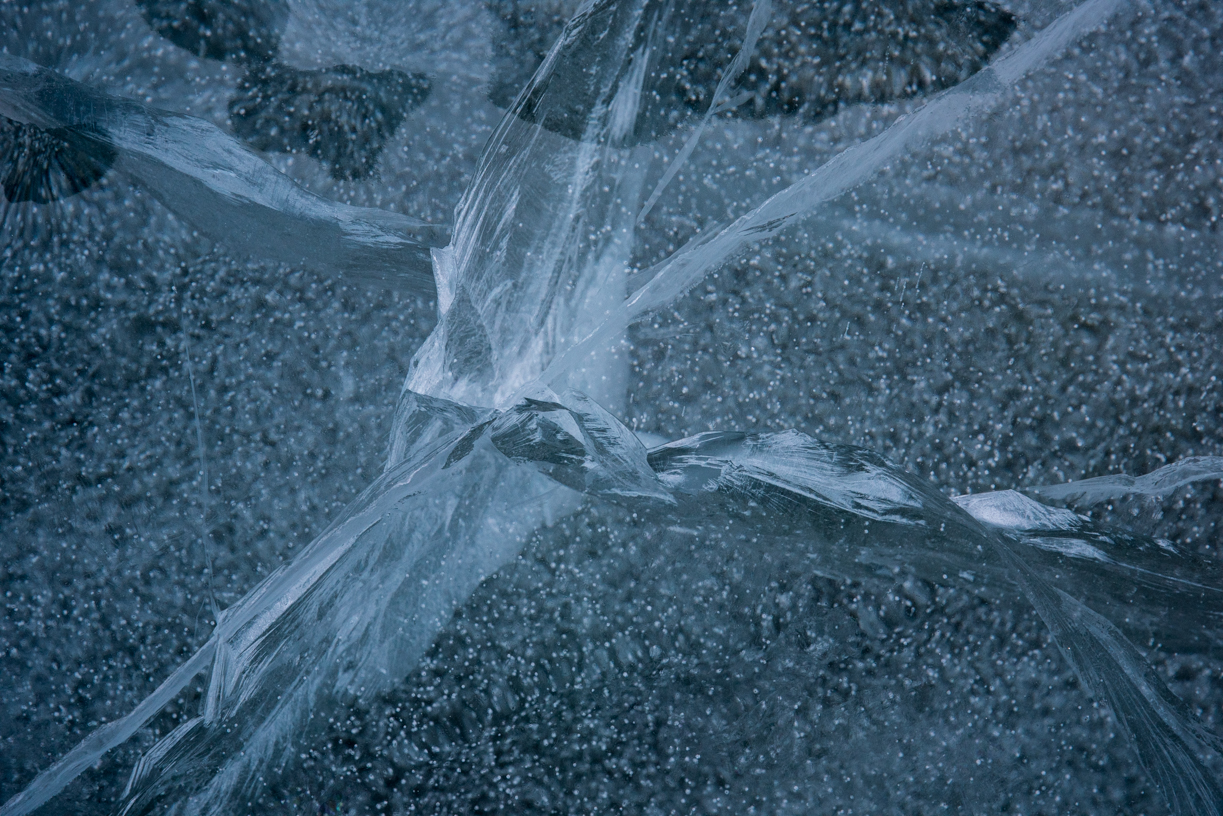 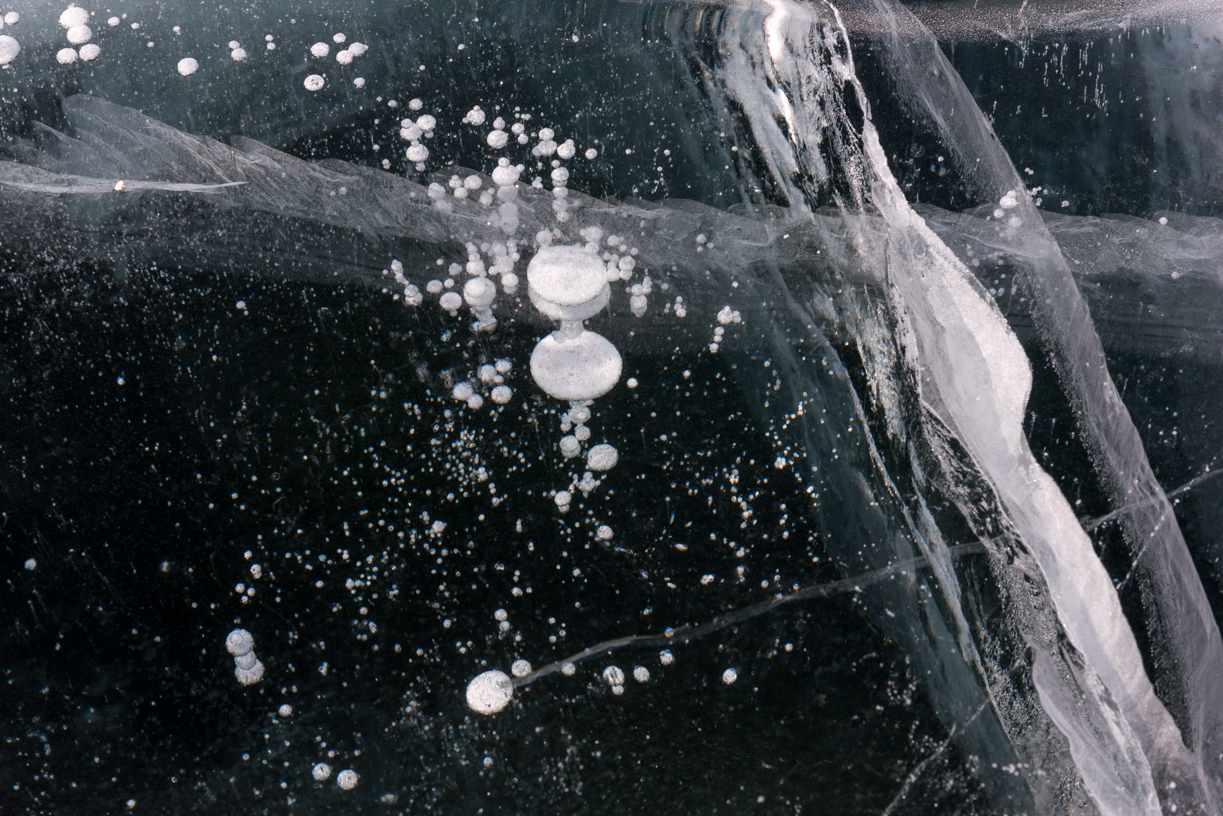 I noted that the opened Baikal ice is not  everywhere. The North and the South of the lake are covered by snow. But the area of the largest island on lake Baikal, Olkhon island, particularly the inner West side of the island (this place is called "the small sea") ice is almost always smooth. 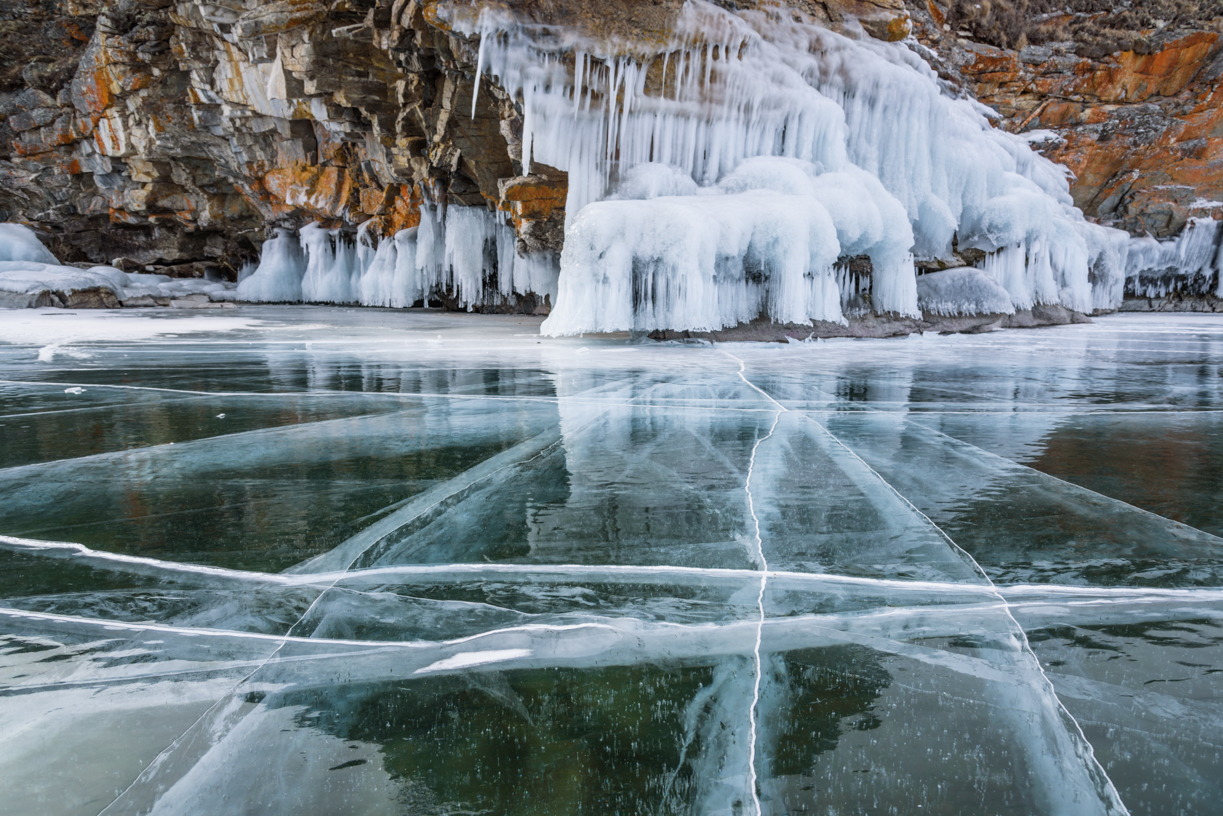 And below you can see more southern part of the "sea" -  stronger wind chasing snow in a completely chaotic direction. Just get ready for this while  you are taking pictures... :) 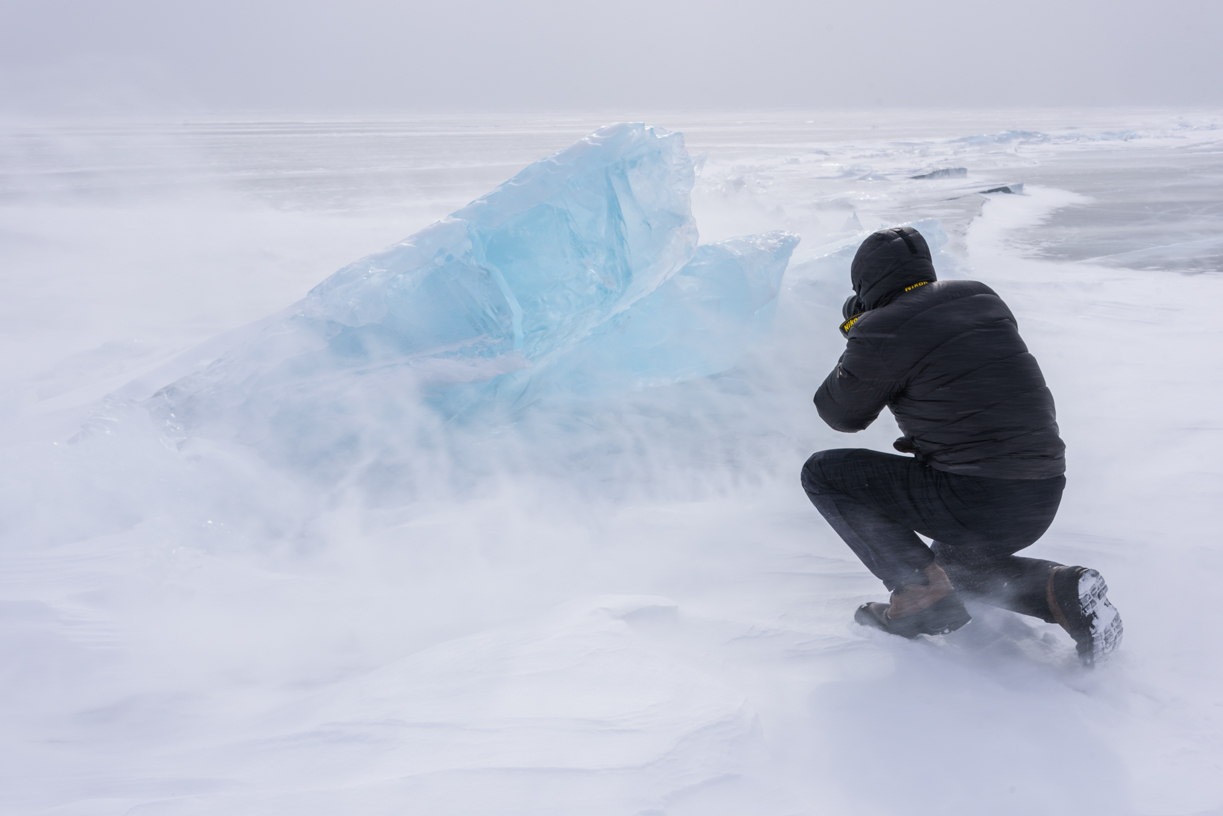 So our journey come to the final stage - the Listvyanka village (60 km from Irkutsk), located in the southern part of Baikal.. what to do here where the snow aroud? (This place almost always covered with snow). Hopefully there are also options like: 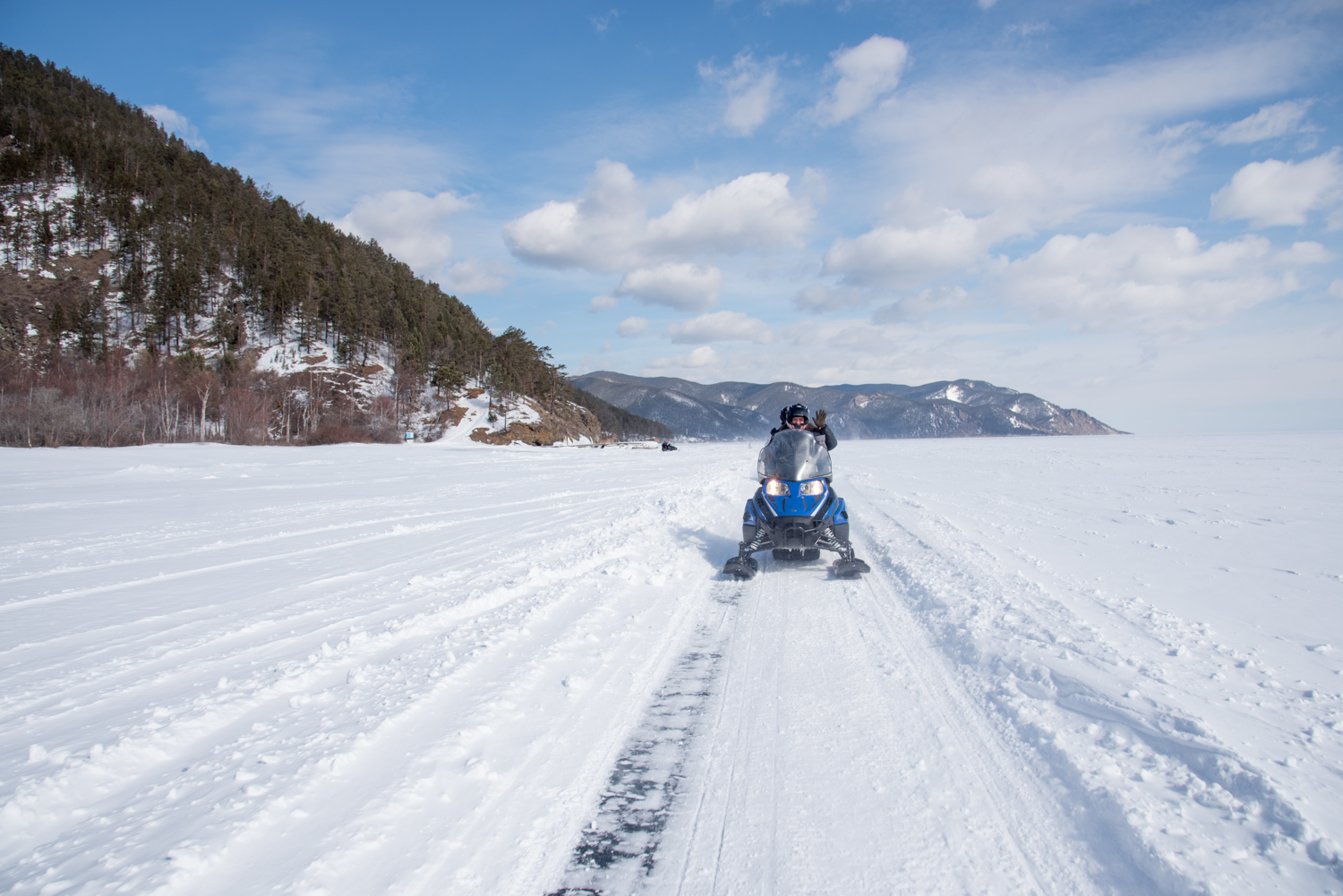 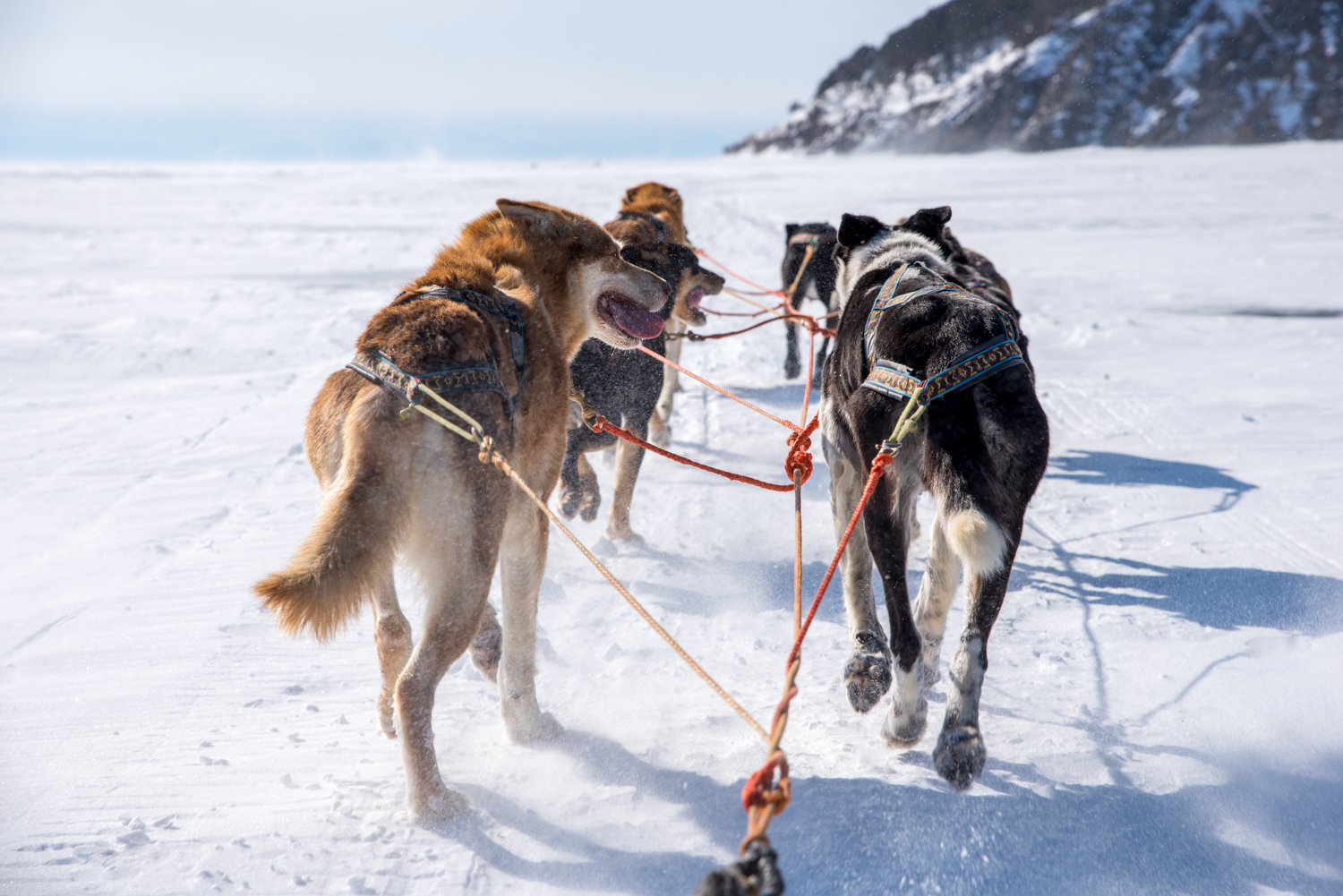 - and, of course, a sauna with a dip in the river Angara (river which flows out of Baikal) 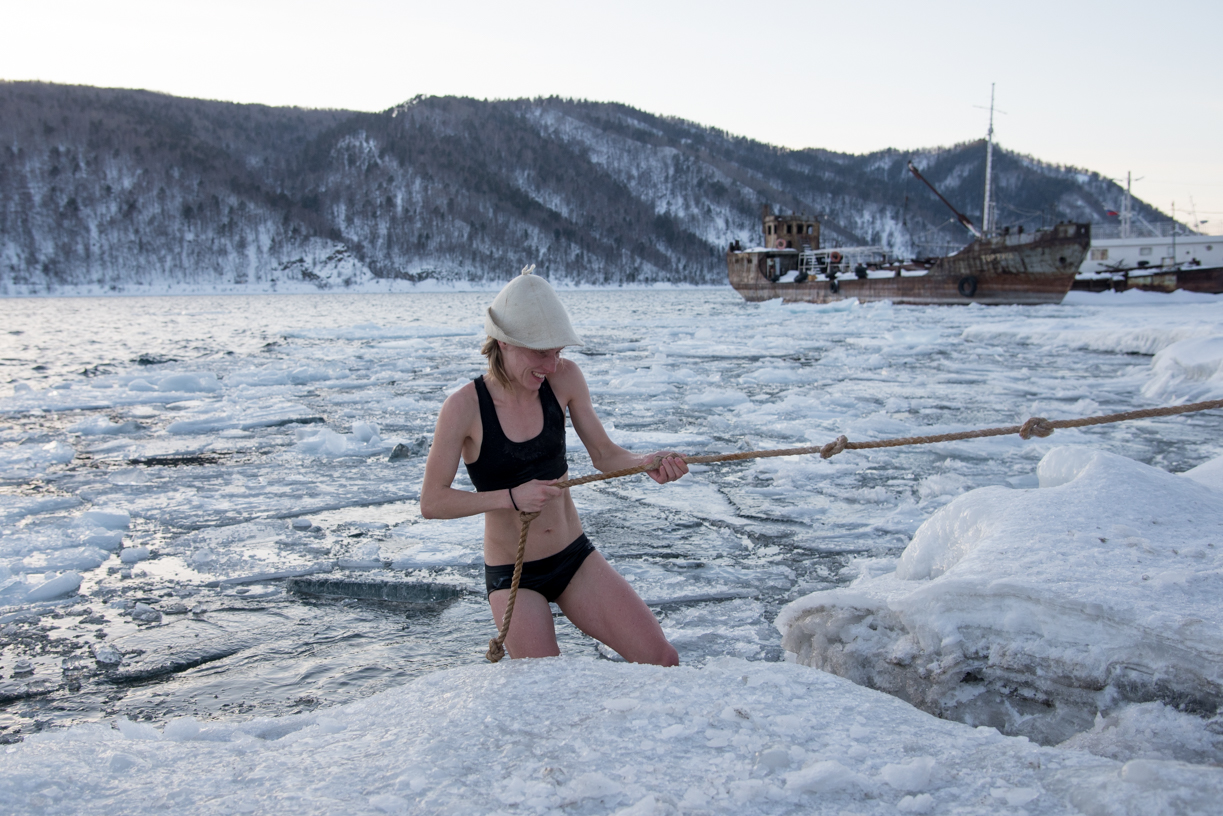 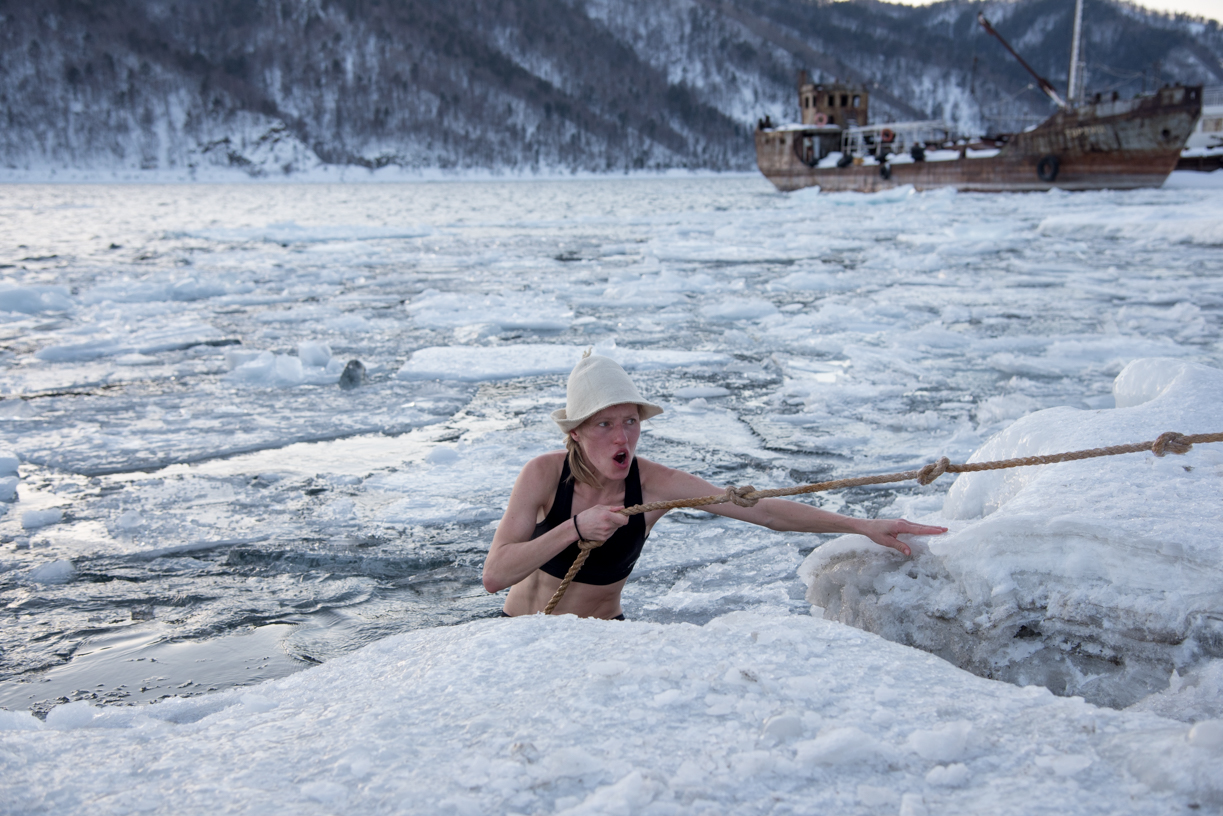 So in the end my description of photo tour at Baikal lake I want to add one more image, which is selfexplanatory.. 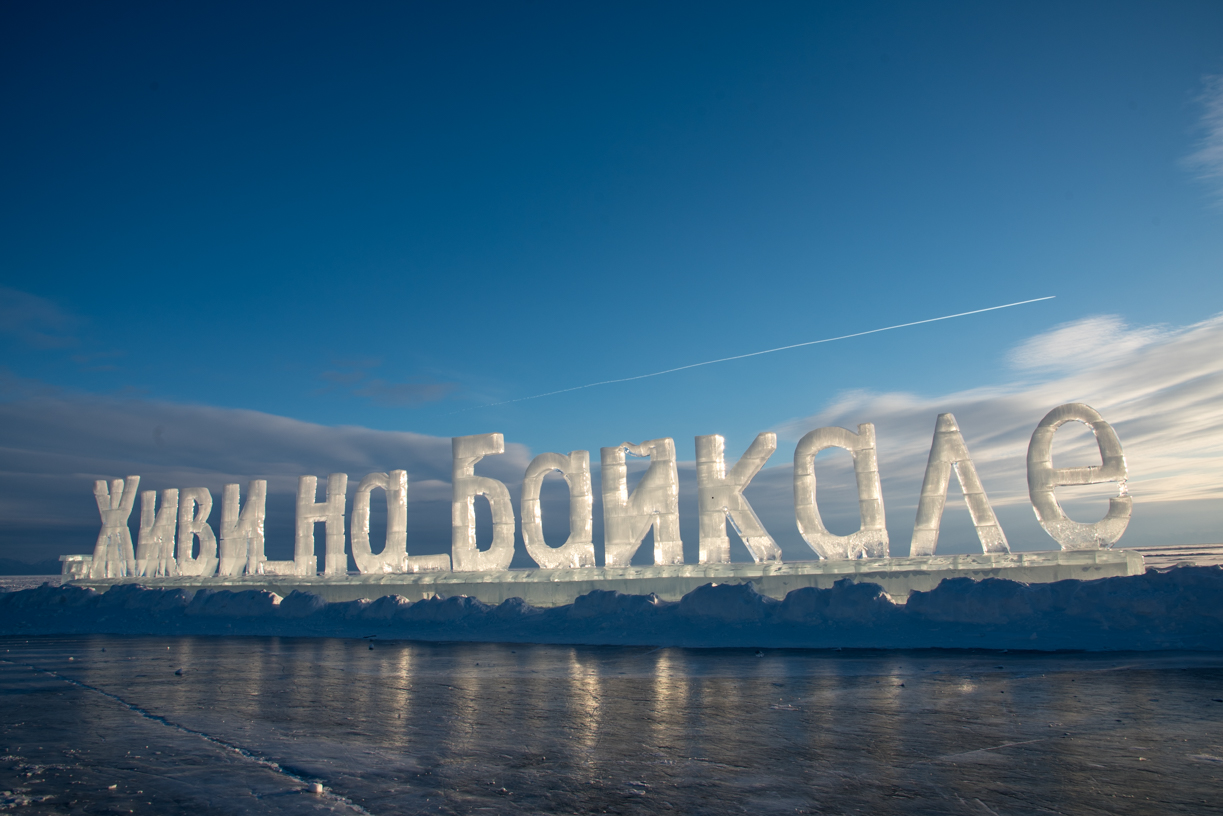 Especially for those whose have not yet learned to read Russian, there's written "LIVE ON BAIKAL":)

Photos taken by a professional photographer Rolf Gemperle can be viewed by clicking on the link: www.rolfgemperle.ch